So this is what it’s like when worlds collide.

By Luke Reilly
How do you remake a game that’s spent two decades perched at the pinnacle of what this industry has to offer? I mean, the original Tony Hawk’s Pro Skater 2 isn’t just considered as one of the greatest sports games ever made; it’s literally wedged amongst the top three highest-rated video games of all time on Metacritic. You’d probably be better off cutting your losses and photocopying the Mona Lisa at this point, right?

Well, no, because despite the high bar set by the originals, Tony Hawk’s Pro Skater 1 + 2 is an absolutely rip-roaring remake. Vicarious Visions has successfully brought Neversoft’s esteemed classics back to life, allowing old and new fans alike to experience these masterpieces through a modern lens while remaining entirely respectful to the moves, the maps, and the music that’s been seared into the brains of millions since the turn of the millennium.

THPS1+2 pushes off on the right foot immediately, with a fantastic intro fusing footage of the iconic stars of the original games with clips of the new skateboarding superstars joining the roster. It shouldn’t be understated how effectively this otherwise fairly simple sizzle reel instantly injects these new skaters into the fabric of Pro Skater, meaning they don’t just feel tacked on.

The levels, the moves, the pros, the songs – every element of the original games that earnt them their legions of fans is back with a 2020 makeover

Things just get better from there. The levels, the moves, the pros, the songs – every element of the original games that earnt them their legions of fans is back with a 2020 makeover. Maybe you played Tony Hawk’s Pro Skater HD back in 2012. Maybe you think you’ve already had this experience.

Everybody’s Heard About the Bird

It’s actually quite remarkable dropping into each of the nearly 20 levels and marvelling at just how authentically they mirror the geometry of the 1999 and 2000 versions of these same maps. They’re obviously infinitely richer with granular detail, filled with impressive lighting, and – unlike the PS1 oldies – feature a draw distance that stretches to the horizon instead of disappearing into fog when it hits double figures, but they’re also wonderfully familiar. The graphics don’t necessarily eclipse those of other triple-A sports sims but they’re quite handsome, and importantly they’re vastly superior to the peculiarly stylised and generally unattractive look of THPS5.

There aren’t really any duds amongst the maps but I was particularly impressed by the Mall’s mild reinvention as an abandoned and decaying ghost town that looks like a flood has swept through it, and Venice’s vibrant colour explosion, with almost every surface sporting generations of layered graffiti. Hangar is also a highlight; it’s never been the most interesting level but here it’s been turned into a virtual shrine to original Tony Hawk developer Neversoft, which is a nice touch.

Both individual games are represented as a separate string of levels in THPS1+2 – and you can progress through them independently – but beyond that everything is unified and accessible from a central hub. Skills points for your skaters that you earn in THPS1 maps, for instance, make your skater perform better for the THPS2 maps – and vice versa. This is a good, elegant solution that beats having each game as an otherwise unrelated mode, like in Vicarious Visions’ last remake effort, the Crash Bandicoot N. Sane Trilogy.

Back from the Brink

Tony Hawk’s previous official outing in the Pro Skater series was Tony Hawk’s Pro Skater 5, which was extremely disappointing despite the Birdman’s best intentions. “Tony Hawk’s Pro Skater 5 occasionally flirts with the joy of movement and attitude that made the original four games classics, but the wheels quickly come off,” explains IGN’s 2015 3.5/10 review. “There are a disappointing number of design and technical problems that range from frustrating to flat-out broken, making this attempt at returning the series to glory a non-starter.”

Those of you with robust memories may remember where a lot of the collectibles and goals on the maps are because, as this is a faithful remake, they obviously haven’t moved. If you recall where Ollie the Magic Bum disappears to each time you jump over him I guess you may find yourself going through the motions a bit, but it’s difficult to fault Vicarious Visions for sticking to the originals.

One place where the remake goes beyond the original road map is that new challenges have been added to the THPS1 levels to make them consistent with the longer lists in the THPS2 ones. This freshens things up a little while they last, but the biggest boost comes from the absolutely exhaustive list of overarching challenges that can be completed across any of the maps at any time, from certain strings of tricks to specific enormous points totals. Completing these ties into a new, overall leveling system that earns you unique decks, plus cash to drop on other gear for your skaters in the store. Many I achieved by accident, though others I completed after spotting them while shuffling through the menus. Especially on the first run through, THPS1+2 feels like one of those games where you’re always achieving something, whether you know it or not. Returning veterans will probably have every map unlocked within a day or so, but with 21 challenges for each of the 21 pros plus several hundred extra challenges on top of those, I can’t really begin to estimate how many hours of play there are here. Chuck in multiplayer and the much-enhanced create-a-park tools and it may be endless, especially as parks can be shared online.

I predict that some players of a certain vintage may end up a bit anesthetized to all the pop-up notifications and flashy bonus-collection-button-mashing – I know I became a bit numb to it – but I wouldn’t say it compromises any of what’s great here. If you just want to hop in and play through some incredible-looking maps from THPS1 and THPS2 – whether you’re looking to chill, chase scores, or chuck a controller around between some friends, THPS1+2 will satisfy. But if you want to devote yourself to chasing over 700 challenges across every skater and earn boards and other booty, THPS1+2 can most certainly supply that. There are no microtransactions and everything in the game can be unlocked via gameplay.

Despite sticking with tradition in terms of the maps, the default controls are actually more akin to those in THPS3 and THPS4 rather than the first two games. But before you freak out, know that the more limited, original movesets are available to toggle on for purists who crave an experience precisely like the original games – removing things like reverts, wallplants, and even manuals if you want – but I’m enjoying the default controls as they are. I have a lot of love for EA’s Skate and I’m fascinated by Skater XL’s technicality, but there’s also a lot to be said for THPS1+2’s big combos and pure arcade thrills and spills.

Question
Aside from the Tony Hawk series, what was Activision’s best extreme sports experience? 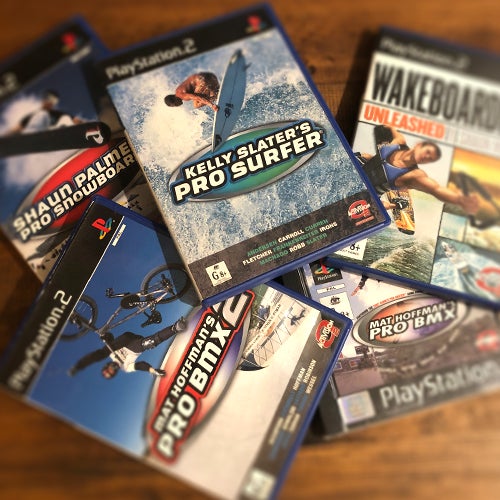 For the young or inexperienced who may find all of this a bit too frantic and unforgiving there are cheats that can be activated to make things easier, though those scores are tracked separately so your kids or your grandma won’t be able to completely overwrite your greatest no-assist accomplishments. If you’re concerned about the presence of such a crutch, remember: this is a game from the ’90s, and the only thing more ’90s than video game cheats are acid-wash jeans and the soundtrack to Batman Forever.

Speaking of soundtracks, the famous THPS music selection is virtually all present and accounted for, and that’s perfect because it’s such an indisputably integral part of the original games. Vicarious Visions has also augmented it with a well-curated list of old and newer tracks, so it’s now doubly longer than it was originally. You can toggle them off if you want but, while not all the newer songs are to my taste, several are pretty good. For instance, I’d never heard of Rough Francis before THPS1+2, but these guys are awesome. Exposing me to new songs that will go on regular rotation in my car for the next few decades is exactly what Tony Hawk’s Pro Skater games did back in the late ’90s and early 2000s, and THPS1+2 is doing it all over again. Impressively, THPS1+2 hasn’t just captured the spirit of the originals in terms of the meticulously rebuilt maps and faithful feel – it’s done it in subtler ways like this, too.

Tony Hawk’s Pro Skater 1 + 2 is such a tremendous turnaround from 2015’s disastrously dismal Tony Hawk’s Pro Skater 5 that it’s difficult to believe they share even a shred of DNA. The accessible yet tricky skating is earnest and old-school fun, the wonderful looking levels are lovingly designed odes to the past, and the music is like the hearty embrace of an old childhood buddy. It’s pretty easy to be cynical about how rapidly selling us our favourite games again became a central pillar of Activision’s business strategy, but when it’s this much fun I’m finding it impossible to be sour about it. It turns out going backwards has been the best step forward Activision has taken with the Tony Hawk series in nearly 15 years.

Was this article informative?

Buzz on the Bullboards: The End of Fossil Fuels?